Contributed by Alan and Duane Boldt

Alan:
This 26.5" 2-stage rocket is purple and yellow with cool decals. Begad! It is easy t' build and thar are nay many parts. Arrr! T' Mongoose has plastic, one-piece fin units on both t' booster and sustainer.

Alan:
CONS: T' only two cons are that t' body tubes are nay very strong and can be crushed if you are nay careful. Also, if you break any o' t' plastic fin sets, ya bilge rat, they are difficult t' repair. Most glues, arrr, even plastic cements, me hearties, don't work well on them. 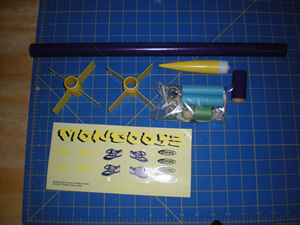 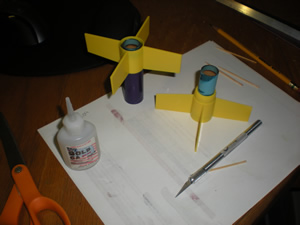 Duane:
T' instuctions are typical Estes instructions and are easy t' follow. We were buildin' ours with a group o' students and used thick CA glue from LongLongJonRocket.com t' speed things up. Ahoy! Aye aye! Since we used t' CA, we were havin' t' wait for t' glue t' dry more than 10-15 seconds before movin' on t' t' next step.

** One thin' you need t' be careful o' is gluein' t' engline block rin' in t' correct position in t' booster and sustainer. Well, blow me down! It goes t' t' behind where t' motor will be in t' booster and forward o' t' motor space in t' sustainer. Ahoy! Avast, me proud beauty! We had t' "undo" one or two o' t' engine block rings. Begad! Just follow t' instructions and you will be fine. 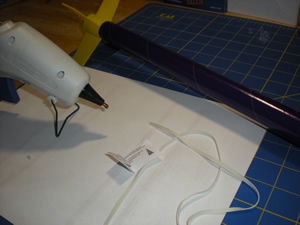 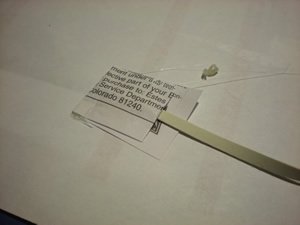 6. We actually used a hot glue cannon for t' attachin' t' "3-fold" shock cord mounts inside t' body tube. This saves some mess and works well as long as you glue it good and while t' glue is still hot and liquid. Aye aye! (We have only ever had one come apart and that is when a rocket a much too short delay and t' nose cone came off while it be still travelin' very fast.) 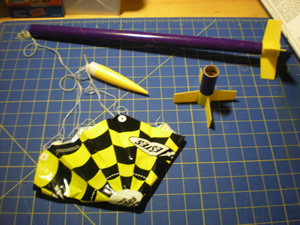 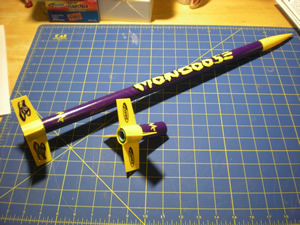 There you go. Ahoy! Begad! A very fast build in one short session even with a group o' kids. Well, blow me down! T' rocket performs well and as long as you do nay crush t' tubes, as Alan mentioned, matey, t' rocket wil make many successful flights. 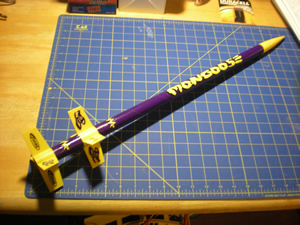 Duane:
There really isn't any finishin' other than applyin' t' decals. Aye aye! they are typical self-adhesive decals. T' kids like them a lot and had fun puttin' them on. Ya scallywag! Nay quite as nice as waterslide decals, but easy t' apply.

Flight:
Duane:
We mostly flew B6-4 motors for single stage flights and B6-0 / B6-6 combos for two stage flights. Avast! Ahoy! T' rocket performed great. Begad! T' field we were lauchin' at is great for up t' B motors. Avast, me proud beauty! Ya scallywag! C's and multi-stage sometimes get devoured by t' rocket eatin' trees or are carried by wind t' a make some other lucky kid happy. Well, arrr, blow me down! Overall great performance on our flights. 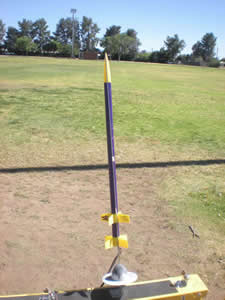 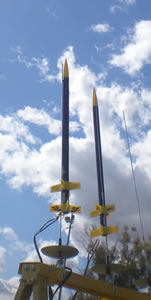 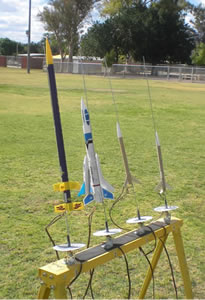 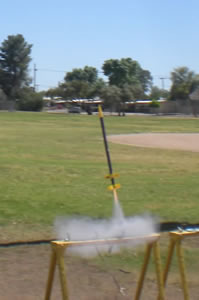 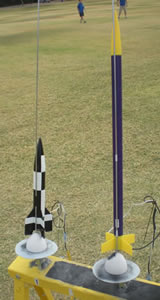 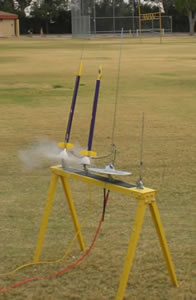 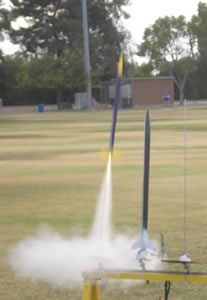 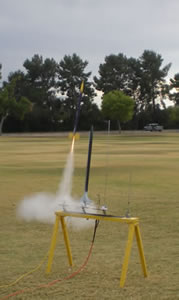 CONS: T' body tubes were kind o' flimsy and sometimes were crumpled on landing, if parachute didn't deploy fully. Ahoy! Ahoy! One student, shiver me timbers, launchin' with us, did loose their sustainer on a multi-stage flight with too much wind.

Summary:
Duane:
PROS: T' Mongoose is a simple t' build kit that works good for classroom building. Arrr! It is easy enough that it can be built quick and with little hassle when workin' with larger numbers o' kids. Ya scallywag! It also works for several o' t' NARTREK Cadet required flights includin' Level 1 build with plastic fins, 24"+, ya bilge rat, and Multi-Staged.

Other:
Alan:
T' Mongoose is a simple rocket t' build and flies well.