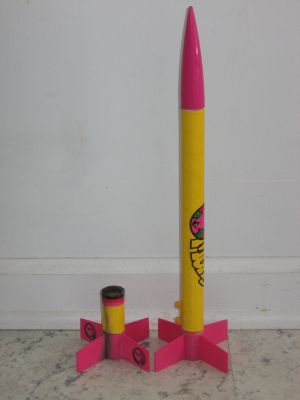 Brief:
This is a fairly simple 2-stage, 18mm rocket from Estes. I have slightly modified mine with shortening and a modified booster motor mount to repair damage. 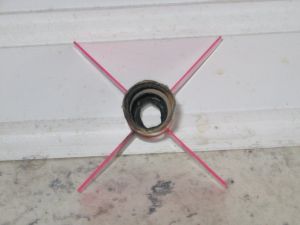 I barely remember anything about construction of the original. Be very careful to align the launch lug halves perfectly. I would suggest going with a single, longer lug. Mine currently uses the scavenged plastic lug assembly from a Space Bus and that works well.

I took about 8" off of the sustainer body tube after it crimped twice--right above the fin unit and about 6" above it--and glued the fin unit on again. Five inches of the scavenged tube now resides in the pop-pod of my new boost glider; the rest was crumpled and trashed. The Mongoose is still perfectly stable and flyable even when shortened.

The other major modification is that I no longer have the lower motor mount tube. It was crushed the first time I tried to put a motor in it. All of the tubes in the kit are too thin and poor quality. I simply removed the tube and glued the lower engine block into the bottom centering ring. I now simply wrap the booster motor with a bit of masking tape and everything works great.

I suggest replacing the 2 crappy motor mount tubes with better, stronger BT-20 pieces. Be prepared to either shorten the body tube or repair it with tube couplers or fiberglass.

Two and a half points for building alone because the rocket is too flimsy for its own good, but the fin units make a lot up.

Finishing:
There's no painting to be done. The decals are sticker type--much easier for fumblefingers like me--and look halfway nice. The yellow and magenta coloring looks nice. My only complaints are the plain launch lug that doesn't fit in the color scheme and that the spirals on the body tube are visible. Picky, picky.

Four and a half points for finishing alone. 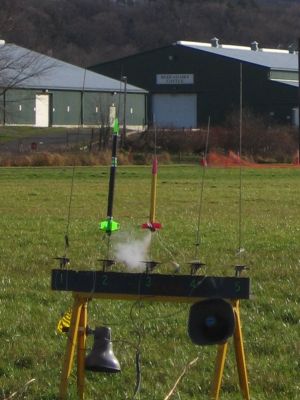 Flight:
My first "flight" was on an A8-3 in 2004. The launch lugs weren't aligned enough and it stuck on the pad. That was my mistake.

The next flight was sometime last year on a B6-4. It was a perfect flight with a loud, straight boost to about 300 feet. Although the streamer deployed fine, the body tube crimped on impact, prompting me to make the changes.

The next flight was 2-stage on a B6-0/B6-6 combo. It was straight and fast, but staging was low enough to be seen. The sustainer disappeared into the darkening sky, only to reappear under its streamer 30 seconds later. Both of my modifications worked fine.

Its latest flight was on an A8-3. The flight was low, about 120 feet, but stable. The streamer didn't deploy, but it landed with no damage in a puddle of water. After drying, there was no damage, weakening, or warping.

However, either from deployment or more likely my handling, the loop broke off the nose cone. I simply drilled a small hole on the end of the nose cone shoulder, inserted a small screw, and glued it in with CA. The shock cord ties firmly to the screw head. 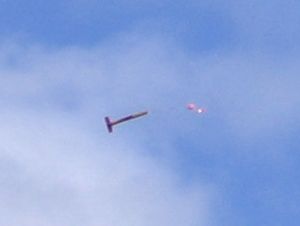 The 1" x 30" streamer is too long and it doesn't flap. A 2" x 20" streamer would be better. For A and B single-stage flights, a 12" parachute would be fine, but the streamer is needed for C and 2-stage flights because it is fairly light and would drift away quickly, especially from 1600 feet on a C6-0/C6-7 combo.

The main complaint I have though, is that the booster is marginally stable after separation and the front tends to crumple a bit. The reinforcement ring, however, excellently prevents it from crumpling too much.

Summary:
Estes calls the Mongoose an excellent first 2-stage rocket. I say the Loadstar, Solar Flare, or one of Quest's L1 2-stagers would be a bit better. This was the first 2-stagers I built and the second I flew, so it's not too off the mark.

The Mongoose is a great flier for large and small fields. Except for the too-stable booster, it flies excellently. The main problem is that the tubes, especially the engine mount tubes are substandard. The plastic fin units are excellent and prevent beginners from having to mess with 8 fins, and the pre-finished look is excellent.