Modification ReviewsReviews by Dick StaffordReviews of Deuce's Wild to Deuce-XL5 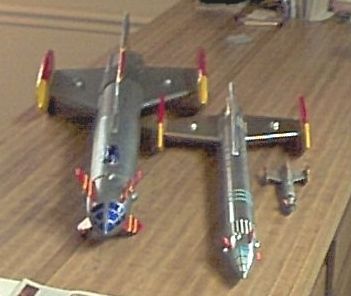 After seeing various Deuce bashes on The Rocketry Forum and elsewhere: eugenefl's fighter, sandman's DynoSoar, a super-roc version, and most recently an egg-loft version flown at NARAM, I decided to build a Deuce-XL5 to go with my 29mm and MMX Fireball XL5s. My design constraints included keeping the Deuce's length and fin pattern for the side fins. As a result, the model resembles the Fireball XL5, but will not be to 'scale'.

Modifications:
I wanted to use the leftover Avery sticker material from my A.C.M.E. Spitfire build, so I actually started the project by drawing the stickers in Corel 9. I used a drawing of the Fireball XL5 and scaled the fins and other patterns to the BT-60 tube. After I drew and printed them, I realized that the scale sizing would be fine for the small forward fins on the nose cone, but that side pods and top fin wouldn't look right given the relatively large Deuce fins. As noted in the intro, I wanted to keep the Deuce fin pattern for the side fins. Using my stock Deuce as a guide, I played around with the pods and top fin patterns until I thought the looked right. 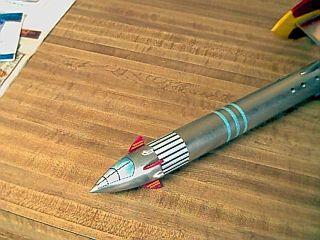 While I was settling on the final patterns, I went ahead and built the nose cone using a spare Deuce-style cone that I had bought for a future project. I first sealed the cone and marked the positions of the fins and 'thruster' pods. I turned two small 'cones' from a dowel. These were split and glued on in between the fin marks. The nose was then painted with Wal-Mart chrome paint. I used the stickers I produced as a template and cut the forward fins from balsa. As with my 29mm XL5, I used strips of colored sticker material to cover the leading and trailing edges of the fins before I added the main stickers. The fins were covered with a thin layer of white glue to seal the edges of the stickers. Finally, I carefully removed some of the chrome paint, and glued the fins on with Liquid Nails Perfect Glue, Type 2.

Shortly after the cone was complete, my Deuce kit arrived. 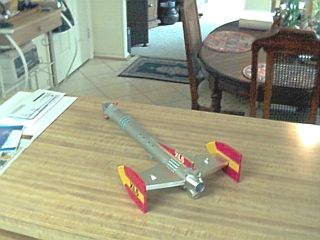 For the body, I built and mounted the motor mounts per the Deuce's instructions. To mark the position of the side fins, I used the template marks for the launch lugs. This positions the fins orthogonal to the plane of the motors. I was thinking that in this orientation, the possible difference in thrust between the motors will tend to tip the rocket, and having the biggest fins working against this force would be best.

I then added the dorsal fin. When doing the planning, I forgot that this would rest on top of one of the motor pods, so I had to trim the back end. This will also interfere with the stickers, which also had to be modified upon installation. 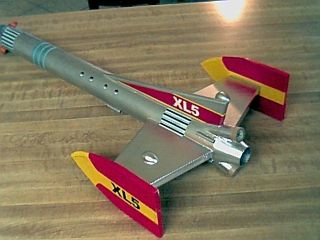 For the side fins, I cut the stock Deuce fins using the provided template. I then formed them into two '3-D' structures using a strip of foam board on the rear edge and a center support made from a strip of balsa. The resulting fins were sealed with fill-n-finish and glued to the body with Perfect Glue. Fillets were made using 5-minute epoxy.

Prior to priming, I wanted to add some detailing so I added egg shaped pods, bought pre-made from Michaels, to the wings. I also added 4 lugs around the base of the BT just above the tail cone. On the bottom, I added 2 lugs further up the BT. Each of the bottom pairs of lugs are functional. I had carved and sanded a cockpit out of foam, but at the last minute decided to leave it off. 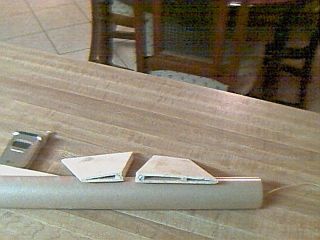 I finished the body and then installed the side pods using Perfect Glue. I learned from experience that these pods will take a beating on landing so they got nice epoxy fillets to beef-up the joint to the side fins.

I built a RockSim 7 model of the Deuce-XL5 to help verify the CG/CP relationship. Despite the new features in RockSim, I still had to emulate the side pods. This model roughly agrees with the field-proven relationship on my 29mm Fireball, so I used that as a basis for adding nose weight. I bored a 1/2" hole in the cone and added lead shot until the CG was 2 inches ahead of the predicted CP. This shot, and a loop of Kevlar® string were epoxied into the cone. 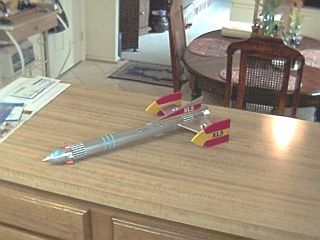 As with my other Deuce, I added a section of Kevlar® thread to the motor mount. An elastic cord is tied to this leader and to the loop in the cone. I used some thicker elastic since the model is fairly heavy. I elected to use a chute from my range box, and have not built the stock FlisKits chute.

I primed the assembled body (less pods) with Painter Touch sandable primer. When I added my 3rd coat of primer, about 1/3 of the top of the BT started to develop spider web-like crackles. Either I didn't wait long enough between coats and/or it was too humid. After a day, I sanded the crackles and they seemed to flatten just fine. In my previous experience, the crackles stayed gooey and took a lot of clean up, so this was better than expected. When I laid on the chrome metallic paint, they did come out slightly but not too bad. After light sanding and a second coat of paint, they are harder to see than the growing number of fingerprints.

As you have seen, I discussed the stickers throughout the construction review, since the full-sized fin stickers were integral to the design/construction process. I learned a lot about working with the full page stickers: what works to seal an edge may not be best for a large area, testing sealers on stickers with a backing doesn't tell you how they will react when on a model, and a sealant which smears the colors may really work the best. I found Elmers' glue didn't smear the ink, but would bubble a sticker that was applied to the balsa; MinWax Polycrylic did smear the ink, but was easier to apply and gave a better surface. The latter also did not bubble the sticker (neither bubbled the stickers, of course, when the backing was still on - so much for my testing). On the side pods, I did one with Elmer's and one with Polycrylic. When using Polycrylic, I did a quick application where the colors met, and then did the yellow by itself, then the red, etc. This eliminated the visible smearing, save one spot where I was all thumbs and touched the wet pod. I used Polycrylic on all the remaining stickers.

Flight:
I prepped the recovery system by forming a plug with some Estes wadding filled with dog barf wadding. I used an 18" Mylar chute. The two C6-3 motors were held in with tape, and I used Estes' igniters that I dipped in Magnelite pyrogen for extra insurance. The rocket flew great, with a low arching flight that resembled that of my Shrox SHX-15. Ejection was at apogee and the rocket recovered without even a crack in the fin joints. Perfect! I thought about trying two B6s, but decided I should stick with C6-3's.

Summary:
This was a satisfying project that let me merge one of my favorite scratch rockets, the Fireball XL5, with one of my favorite kits, the Deuce's Wild. (I also got the chance to join the ranks of the Deuce-aholics kit bash group.) The rocket was stable and had a neat flight profile. I am very happy with it and it gathered many good comments at the field, from young and old alike.