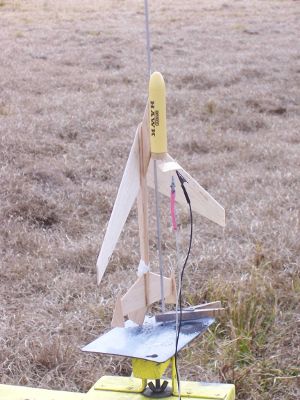 Brief:
I put my order into Semroc during their end of the year Christmas discount. My order was already over $40.00 and the Hawk was a free kit! I added an extra Hawk to my order. One to build, one to hoard.

I had an AMROCS catalog in the early 1970s. I remember thinking it was a near twin to the Estes Falcon. With laser cut fins, this kit went together much easier than my original Falcons did.

Construction:
There aren't many pieces in the kit inventory. 2 sheets of laser cut balsa make up the bulk of the model. That and a BT-20 Body Tube, nose cone and 1/8" launch lug round out the kit.

All pieces released well from the laser cut balsa sheets. This balsa is 3/32" thick. The old Estes Falcon was made from 1/16" balsa. If memory serves me right, Semroc decided to go with the Hawk design over the Falcon because the Hawk's balsa was a little thicker and structurally stronger.

I sanded off all the tabs and blackened edges with 320 grit sandpaper on a block.

It's amazing how strong the model is when glued together. Considering it's just balsa, the "T" shape of the fuselage makes for a very sound main body.

At Step 13, I sanded an slight angle in the wing root edge to give a better flush fit against the fuselage.

I decided to fill and paint the motor tube separately from the glider. I temporarily taped the engine mount to the pylon to glue the wings in place. The engine tube/nose cone assembly has to be in place for the gluing of the wing dihedral. While the model sits on it's back, You glue the wings roots to the fuselage under the "T" of the fuselage. The dihedral is formed by letting the wing tips hang and touch the work table.

While the instructions say not to glue in the nose cone until after balancing the model, I wanted to finish it with the body tube so there would be a smooth transition with no nose cone/body tube seam. If it needed nose weight, I would add clay too the bottom of the engine mount tube.

The small triangular stabilizer tips have a laser cut alignment line burnt into them. The laser line was slightly out of parallel with the top of the piece. I checked the photograph on the instruction cover shot and saw the line was correct. The line was cut a little longer than the stab edge which helped the alignment.

Finishing:
It's not recommended to fill and paint the Hawk. I decided for a compromise. I filled and painted the nose cone, engine tube and launch lug. The underside of the glider got a coat of black felt pen. The dried felt tip ink shouldn't add any real weight to the glider.

I glued the nose cone into the body tube and used thinned Elmer's Carpenter's Wood Filler to fill the nose cone joint and body seams. I also filled the seams on the launch lug. The assembly was glued onto the pylon.

I then glued the lug to the motor tube an filleted the lug.

I primed then spray painted the engine mount/nose cone assembly yellow. It looks alright, but I wish I'd gone with a slightly darker yellow. I wanted a good contrast with the black logo decal.

Flight:
After a few backyard throws I found the glider needed some clay near the rudder.

The launch was straight up to maybe 100 feet. The engine ejected with a very loud "pop". I had a long, flat glide into the scrubs and trees. Andrew timed it until it went out of sight. The duration was 18.5 seconds.

I didn't add any trim weight not thinking the model would glide that far away. For the second flight I added a little clay to the right wing tip hoping it would cause it to fly in a wide circle. 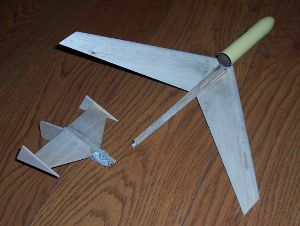 The second 1/2A6-2 boost was the same. But, at ejection, the Estes "shotgun" ejection charge broke the fuselage in two above the stabilizer. The two body parts spiraled in slowly. Non-glide duration was 9.5 seconds.

Recovery:
PROs: It boosted straight and the glide was great on the first flight.

CONs: Mine didn't survive the Estes "shotgun" ejection charge. This isn't the fault of Semroc. They brought back and delivered a great kit.

Summary:
I read that Carl (Semroc) decided to bring back the AMROCS Hawk instead of the Estes Falcon. The body of the Hawk was stronger than the Falcon. I hope to (one day) fix it and fly it again.