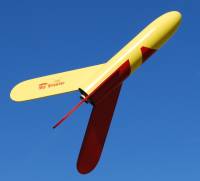 This is my Mo' Skeeter, a 320% upscale of the classic Estes Mosquito. It's a rear-ejection model, which avoids the visible nose cone line that most Mosquito upscales suffer from.

This rocket consists of a Baby Bertha cone, 6" of BT-60, 6" of BT-20, two 20-60 centering rings, a thrust ring, engine hook, and retaining ring, a launch lug, and a shock cord consisting of a Kevlar leader and a length of elastic; I use a standard Estes or Semroc chute with it, attached via snap swivel.

The fins are 3/32" balsa, cut using a 320% upscale of the standard template downloaded from JimZ's site.

I cut the pointed part and attachment lug from the nose cone, bored a new hole to attach the Kevlar, and epoxied the cone in place on the BT-60 tube. I came to regret that decision a bit later.

After notching the centering rings (inside for the engine hook on the rear ring, outside for the shock cord for the forward ring), I installed the thrust ring, engine hook, and retaining ring into the BT-20. I still had some epoxy mixed up, so I used that to secure all these parts. After gluing the aft centering ring in place using yellow glue, I put the forward ring on the tube and inserted the assembly into the sustainer, pushing it in until the aft ring was just inside the BT-60 tube. Doing this pushed the upper ring into the exact position it needed to be in. I pulled the inner tube out and applied yellow glue to secure it.

Next, I glued the fins in place using yellow glue and the usual "stick it on, pull it off, let it dry a bit, glue it on for good" method. Here's where I regretted gluing the nose cone on first... I had to hold the rocket for probably twenty minutes before I was sure the glue was solid enough to stand the rocket on its fins.

When it was all dry, I applied several fillets of white glue (less shrinkage than yellow) then attached the launch lug with yellow glue.

I brushed the fins with thinned Elmer's Carpenter's Wood Filler.  I also brushed it over the body tube spirals and into the nose cone line.  When dry, I sanded the filler smooth; then I started the usual prime-and-sand loop.

When I was happy with the surface preparation, I painted it yellow using a cheap store-brand rattlecan (I don't remember where I got it).  Several light coats followed by the rotisserie treatment resulted in a deep shiny coat; I gave that the usual week to dry (as is usually required with the cheap paint), then masked it and applied Wal-Mart Colorplace Fire Red.

I created the decal myself using the GIMP and some clipart I found online, and printed it using a color laser printer.  I didn't clearcoat the decal before applying it, and it suffered a little bit of flaking before I got clearcoat on the rocket, but it hardly shows.  Laser printed decals sound like a good idea but the current laser decal paper has some deficiencies.  Still, the rocket looks pretty good overall; I'm particularly pleased how well the red decal matches the Fire Red paint. 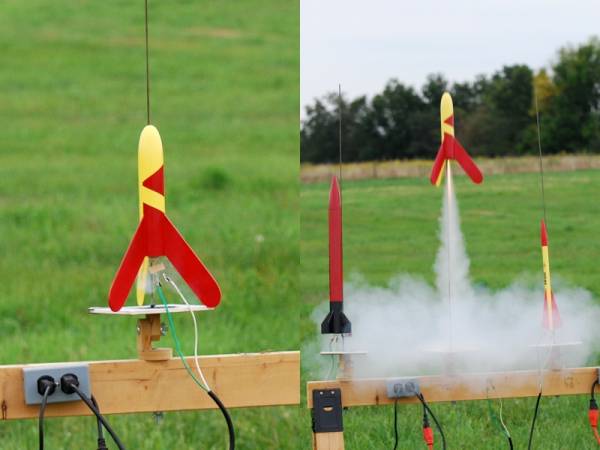 At our 4-H Club Launch on the 9th of July, 2009, I got to launch the Mo' Skeeter for the first time, on a B6-4. It flew well and recovered nicely, albeit on the roof of the landowner's machine shed. Thankfully, we were able to recover it in good shape.

I got to fly it again at the SPARC launch on August 22, 2009, on a B6-4 again.  It was a perfect flight and a perfect deployment. It came off the rod too fast to photograph, which is surprising for a rocket with as much base drag as this one.  There were some minor dings to the paint on the fins.

On September 18, 2010 we had a launch at the neighbor's.  I flew it on a B4-4 for the first time, and WOW do I like that. It took off with more authority than I expected, and recovered beautifully. 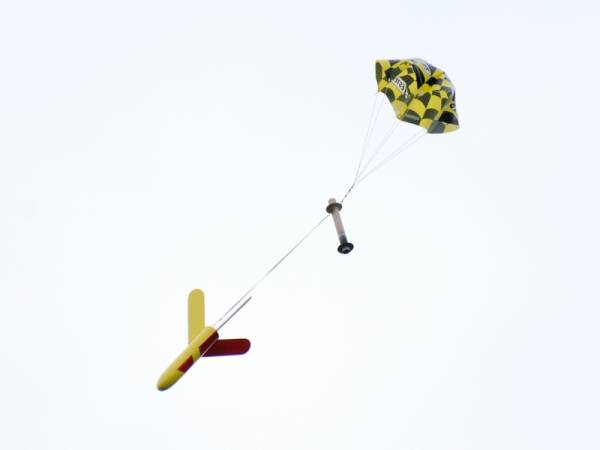 The nose-down recovery of this rocket tends to protect the fins from major damage.  Though it rigs differently than other rockets, I have not suffered a deployment failure, nor any damage to the chute.  And note, this rocket does not require wadding, since the upper ring shields the chute from exhaust gasses.

Mo' Skeeter has become my favorite flier.  It's a real crowd pleaser. 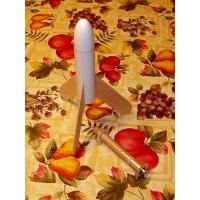 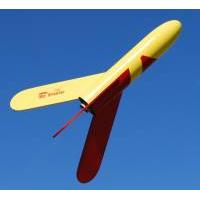 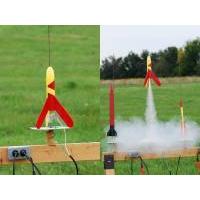 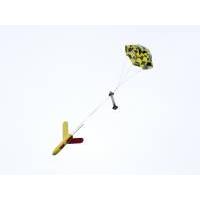