For those of you still following my Goonyness this was Baby Bertha kit bash #11. Again this is not a kit review of the original but another of my many kit bashes. All fin patterns and decals came from http://www.spacemodeling.org/JimZ/est0806.htm. The major difference again being that mine is a Goony version of the USAF Pegasus (Estes Kit #0806). It will also have an 18mm motor mount instead of the 13mm of the original due to being built from a Baby Bertha kit.  I'm doing this review mainly because no one has done one for this rocket yet.

As stated this is a kit bash so the main components came from a Baby Bertha Kit. As a result this will be a BT-60 based rocket instead of a BT-20 tube as the original was.

Decals and wood from the Baby Bertha were placed in with my salvage materials and new wood was used to make all necessary parts for this build. The decals were printed on standard printer paper. The only other parts that I needed that did not come with the kit were a 3/4" end of a tooth pick for the antenna mast and between 1/8-1/4oz. of clay for nose weight.

Construction was done as per instructions with the only Con: having been the tracing and cutting of all the parts from new balsa. On the Pro: side, It was the engine pod assembly that made me build this rocket in the first place. It was another technique for building scoops that I wanted to try and I love the end result. 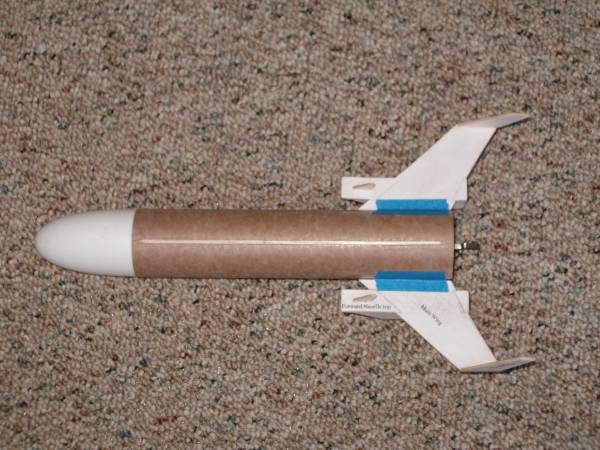 Wings are only taped on so I can get an idea of what it will look like. 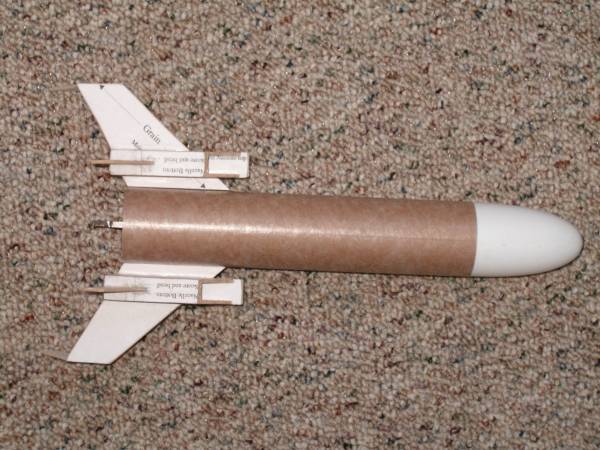 Bottom view (hope I remember to glue on a launch lug).

Finishing was done in my usual method of priming entire rocket with Rust-Oleum 2x Primmer, a light sanding, followed by more priming, and then two coats of Krylon White Gloss. Once dry rocket was then masked off and the Krylon Grey Gloss applied to nose and wing tips. Decals were then printed out and clear coated with Krylon Clear Gloss. After they dried they were cut out and attached with a glue stick. After that entire rocket got two coats of clear gloss to seal on the decals. 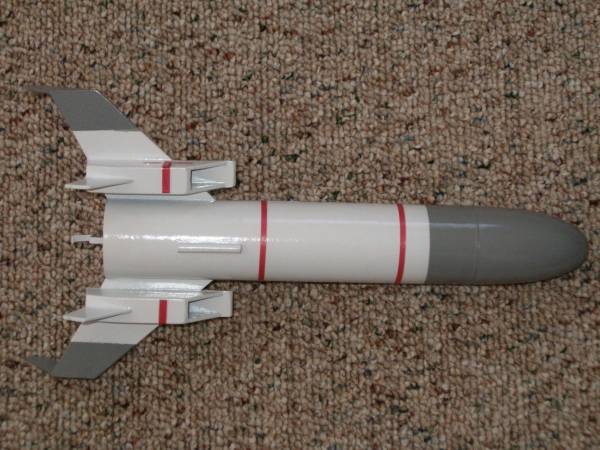 Maiden flight took place on 06-20-10 at a S.M.A.S.H. club launch on an ever popular Estes B6-4 and was a beautiful flight. Rocket left the pad in a big hurry and climbed straight up toward the clouds. No Cons:

Parachute was deployed shortly after apogee with a nice gentle decent. Upon recovery found that the left wing tip was damaged. It was cracked and leaning at an angle. Super glued it back in place. This is the only Con: as I suspect that this will happen again as they are the first thing to hit the ground.

This was another fun build and another learning experience for me. Each of these Goonies were built so I could learn different techniques and ways of building model rockets with scoops, air intakes, tubes and so forth. Anything other than your standard 3 or 4FN style rocket.