Brief:
I chose to build the Streamliner for this contest as it truly spoke to me as something I could do--that doesn't happen often.

Construction:
This rocket started out as an Estes Baby Bertha kit. In order to create the "Streamliner", I cut a wedge shaped section out of the body tube starting just below where the nose cone shoulder ends. Once the cut was made, the edges were glued together to create the sleek tapering airframe for the Streamliner.

The tapered body made the motor mount assembly a little interesting. Not one for perfection, I basically cut the centering rings down a little bit at a time until they fit pretty well in the body tube then glued the motor mount in place. 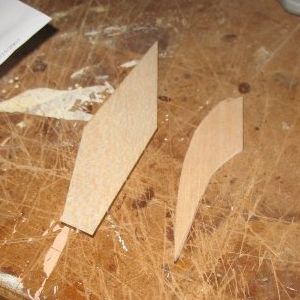 Next up was the fins. If you look closely at the sample picture, the fins are actually two different widths. I took the stock fins from the Baby Bertha and cut the shape of the thicker (red) section of the Streamliner fins from them. I then found some ridiculously thin balsa to cut the top (silver) section of the fins. This balsa was very thin and flexible, so I strengthened these fin sections with printer paper and wood glue, letting them set overnight under a box containing part of my Stephen King collection. The next day, the fins were cut from the pink paper, and they were glued to the bottom sections to complete the fin. The fins were then glued to the body tube, as was a launch lug.

Recovery for the Streamliner is stock Baby Bertha, as is the nose cone. 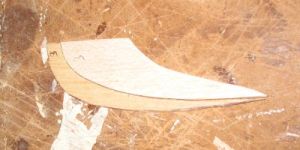 Finishing:
Finishing the Streamliner presented some challenges as most of it is silver, and I've not yet found a way to clear coat silver and have it stay silver. So, I had to paint the red first, then mask it off and do the silver, and then do the rest without touching the silver. I printed the decals at home, and they are the only part of the build I'm not happy with. Oh well. She even sports the EMRR logo on one side, and that's the best decal on her! 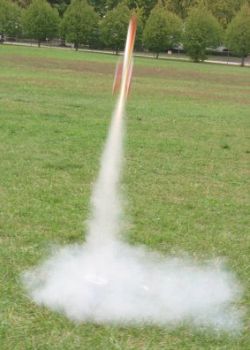 Flight:
For the Streamliners first flight, I chose to fly her at my kids school. My first grader had a "Spotlight" week and asked if I would come with some of my rockets and talk about them as well as launch some of them for his class. We invited all the first grade classes as well as my other sons third grade class for the launch so he could help me. I showed the gathered classes (4 classes in all) the rockets I was launching and told them about EMRR as a great resource for information on model rockets as I showed off the logo on the side of the Streamliner.

Recovery:
This first flight was an A8-3 to keep it low on her first flight. Man, it was great! Shot off the pad very quickly and perfect apogee deployment with a gentle return to earth. Next planned flights will be on a B4-4 and possibly a C6-5.

Summary:
I'm very happy with how this turned out! It was my first major kit bash, and I had a lot of fun with it. I'm very glad I made the decision to build this rocket.