Brief:
This is a 24mm upscale of the (justifiably) insanely popular FlisKits Deuce's Wild! All of the key parts used in this build (the motor mount, body tube, and nose cone) were ordered directly from FlisKits as well. It is built to use all sizes of available and popular 24mm motors.

Construction:
I used the following parts:

No formal instructions are available from FlisKits but if you have built a Deuce's Wild! before (and who hasn't?!?), you shouldn't have any problems building this now that the most significant features of the standard DW! can be purchased from FlisKits. (I should also mention that 13mm/BT-55 versions of the motor mount and nose cone are now available too for anyone interested in building a downscale version.) 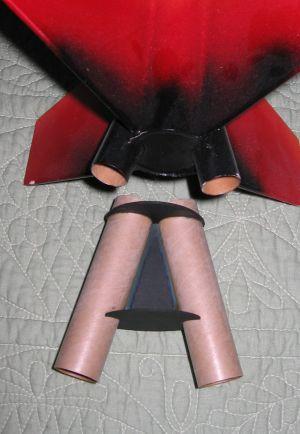 Like all good rockets, it all starts with the motor mount. The MMT kit comes with instructions on building it as well as a fin marking/tube cutting template to install it in the BT-70 tubing. I liked that the template came with markings for both 3- and 4-fin designs as well as launch lug markings for both fin configurations. With all of the excellent documentation included, building the MMT was pretty easy although I found I had to do a tiny bit of trimming on the forward fiber centering ring pieces to get them to fit snuggly on the tubing. Having the template made cutting the BT-70 and mounting the MMT practically a no brainer.

Putting the mount into the long BT-70 tube meant using the template to cut the pair of ovalesque pieces out for the canted motors to protrude from the airframe. I cut the tube by doing multiple passes with a razor utility knife. I dry fit the MMT to check for any modifications. I had to slightly trim the forward centering ring again to get a proper fit. I took it out, smeared some yellow wood glue inside the tube and installed the mount for the last time. I gave it plenty of time to dry before doing fillets around the base of the MMT and along the motor tubes.

Next I needed to cut a 5.5" long piece off one of the other piece of BT-70. Again using multiple passes, I cut the tube and then sanded the edge smooth with a sanding block wrapped with 220 grit sandpaper. I then glued the coupler halfway inside the full length piece of BT-70 with the MMT, let it dry, and then glued on the shorter piece of BT-70. While that was drying I installed the screw eye into the nose cone, mounted one end of the shock cord inside the body tube with a paper tri-fold mount, and tied the other end of the shock cord to the screw eye. 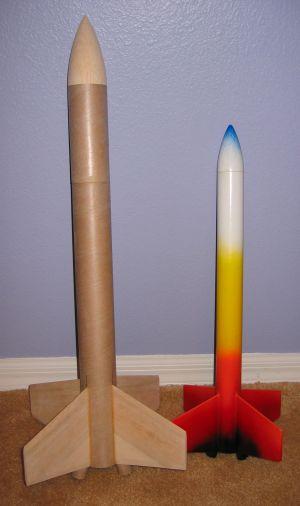 Time to cut and mount the fins. I used a drawing program on my computer to create a fin cutting template. I used 1.33x to increase the fins to a 5.33" root edge and span along with a 2.66" fin tip. I traced and cut the fins from 3/16" balsa stock. All fins were then match sanded for uniformity. I beveled the leading and trailing edges. The fins were then glued onto the body tube one at a time using yellow wood glue and the "double glue" method.

The only thing left at that point was to drill a pair of 5/32" holes for the rail buttons. I prefer to not glue in the rail buttons until I am completely finished painting the rocket. A couple drops of CA was used to hold the rail buttons in when I finally got around to screwing them in though.

Finishing:
Elmer's Fill 'n' Finish was called forth to fill the grain in the fins and nose cone and ensure a smooth transition from the motor tubes to the main body tube. The rocket was sanded smooth with 220 grit and then 320 grit sandpaper. The rocket was then given a coat of Duplicolor Sandable primer, wet sanded with 400 grit, another coat of primer, and then rubbed down with a fine grade scrub pad.

The entire rocket was painted Duplicolor Silver. I emailed Jim Flis to get a wraparound template so that I could tape off the rocket for the stock paint scheme. The alternate color was a Duplicolor metallic burgundy. I don't know if I would use Duplicolor paint in the future as it has a unique nozzle that allows the paint to come out primarily in a vertical or horizontal pattern. This wreaked a little havoc for me as I struggled to get even coverage and avoid runs. I was only moderately successful as there wound up being a couple of small light spots near the motor tubes and minor runs on a couple of fins. After it dried, I polished the paint (and managed to lessen the obvious paint flaws) with a couple of old T-shirts and some 3M Rubbing Compound. 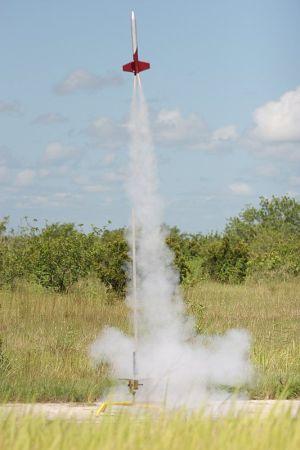 Flight:
All 3 flights were done in a relatively short amount of time at the July club launch for Spaceport Rocketry Association. A couple of days before the launch, I picked up a couple packs of Estes D12-5s and earmarked them for the DW Upscale. Prep was standard stuff: dog barf wadding along with an 18" nylon Thrustline Aerospace chute clipped to the elastic shock cord. I built masking tape thrust ring on the motors as I had the motor blocks glued in for 3.75" long 24mm motors. A couple wraps of masking tape were also put on the motors to keep them from kicking out during ejection.

The rocket was then put on the rail (overkill perhaps but it all but guaranteed that I'd be able to see the distinctive smoke trails during liftoff!) and hooked up with one of my homemade clip whips. Both motors ignited on all 3 flights. Liftoff was near vertical. A hundred feet or so up the rocket went into a spin leaving a very cool helix smoke trail.

Recovery:
Ejection was at or near apogee on all 3 flights. The first flight had the calmest conditions and it was obvious that ejection came a little on the early side. The second and third flights had slightly windier conditions causing the rocket to be more horizontal at ejection. This was the first times I used my 18" nylon Thrustline Aerospace chute and it was definitely a perfect match for this rocket. It opened quickly all 3 times and brought the rocket down comfortably without much drift. Considering the overall altitude of the flights, I felt I had reasonably short walks to retrieve the rocket afterwards. The rocket had no damage from recovery. 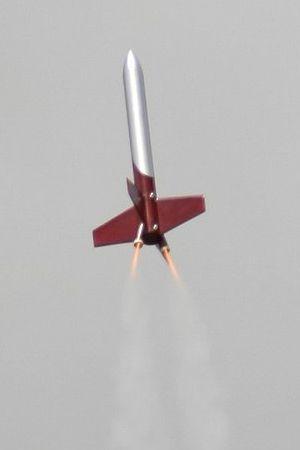 After the second flight though, I noticed there was noticeable bubbling of the paint on the motor tubes just above where the motors were located. Putting my finger inside the tube, it doesn't appear to be any damage to the tube (other than a build up of BP residue). I wanted to fly it initially on D12s but I'm planning on getting some E9-8s in the future.

Summary:
This was a fun project and was as easy as building the original. Acquiring the parts was super easy thanks to FlisKits making them available for sale on their website. In fact, the parts didn't cost noticeably more than buying the original kit! Anyone who has built the original shouldn't have any difficulties recreating this larger version. Bigger IS better!