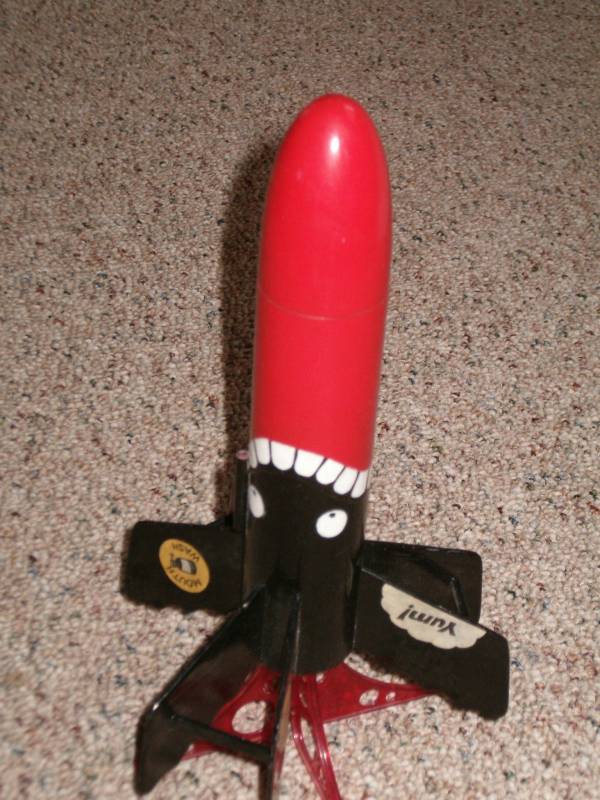 The Sky Shriek was clone number four of the original Goonybirds that I built. And as such is another kit bashed Baby Bertha. The plans were downloaded from  http://plans.rocketshoppe.com/estes/est0855/est0855.htm. I then followed these to build the Sky Shriek with the exception of it having an 18mm motor mount instead of the 13mm mount that was in the original.

The only real Con to this build was cutting all the curves in the new fins and the holes for the three struts, plus having to shorten the BT-60 tube to 6". On the Pro side: Making the BT 6" long instead of 5 1/2" (as was the standard for the Goony Birds) leaves room for the recovery system. I was also able to skip half of step 4 because I'm using the Baby Bertha NC. Just gotta remember to add some nose weight. The rest of the construction was by the book with no problems.

Finishing was done in the standard sand, prime, sand, and prime again with Rust-olium 2x white primmer. Top half of the rocket was then painted with Krylon Gloss Red. After second coat was applied rocket was set aside for the day to air dry. Once paint was dry, top of rocket was masked off and bottom half painted with two coats of Krylon Gloss Black. Rocket was allowed to dry again before removing masking tape. While rocket was drying again I set about printing out the decals. These were done on standard printer paper and clear coated before cutting them out. They were then attached with a glue stick. After allowing some more drying time and checking that none were coming lose, entire rocket received a clear coat of paint to seal in decals. A little more drying time and one final clear coat and the rocket is finished.

Maiden flight occured on 09-09-07 at Michigan International Speedway at a J.M.R.C. club launch on an Estes B6-4. Rocket was almost a blurr as it left the pad. Nice high flight with parachute ejection just past apogee. 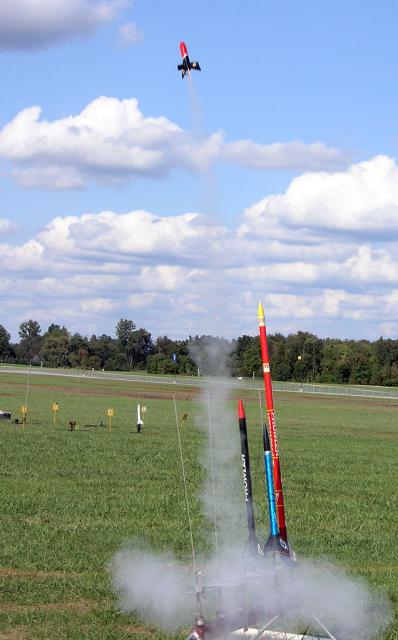 So fast off the pad almost missed the shot

Recovery was text book perfect. Parachute deployed fully and gave rocket a nice gentle decent with no damage on recovery.

This is another gem of a flyer and was a fun build.